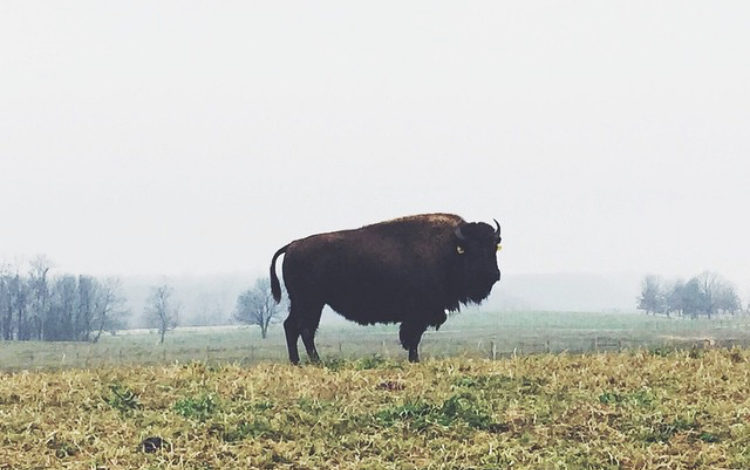 While growing up in Montana, we were surrounded by Bison. From Randy's Ranch to playing in Yellowstone, there were always a lot of Bison around me. I spent my entire childhood believing that those large, lumpy beasts were Buffalo! This is a common misconception I share with many, due to the way people interchangeably use the words Bison and Buffalo. I am here to debunk three common myths about Bison I believed until recently!

Myth: Bison and Buffalo are the same.

Fact: While Bison, Buffalo, and Cattle all do come from the same family, the Bovidae family, they are all very different animals. It is easy on the eye to distinguish between a Cow and a Bison because Bison are typically larger and have much longer, thicker hair than the average cow. How do you distinguish between Bison and Buffalo, though? Well if you are in North America, chances are you are seeing bison. Bison mainly inhabit North America while Buffalo live in Asia and Africa. They are similar physically but Buffalo don’t have the classic large humps or thick hair that is seen on Bison.

Fact: High quality Bison meat should not have a gamey flavor or taste. Bison meat has a very tender, savory taste while being high in protein and low in fat!

Myth: Bison is harder to cook than other meats.

Fact: Bison is easier (and faster) than most meats to cook! A rule of thumb is low, slow, and 1/3 less time on steaks than their beef counterparts. Ground Bison can be cooker similarly to ground beef but there is less fat so it will cook slightly faster. Beyond that, Bison is perfect for grilling, stir-frying, crock-pot dinners, and your classic cast-iron cooking!

Now that you are ready to make the switch to bison, check out our bison bundles from our friends at Woodland Farm.

Heather is Foxhollow's Knower-of-Things and Garden Goddess! Heather is a former educator who loves developing ways to teach the community about biodynamic farming and gardening. When she’s not organizing community events or working in the gardens here at Foxhollow, she’s probably in her own garden, hiking and camping with her family, or lost in a book. Heather is a graduate of the University of New England and has a Master’s Degree in Education from Vanderbilt University. She has dedicated her career to broadening others’ views of the world. Whether leading book talks or teaching people the importance of sustainable farming practices– Heather is always eager to share her knowledge with others and is passionate about welcoming people to the farm to experience land stewardship in action. She grew up working on her family’s traditional beef farm in Finchville, KY and learned how to tend the garden under the gentle tutelage of her grandfather on his farm in Campbellsburg, KY.
Beef & Macaroni Casserole
It’s Time You Make Bone Broth