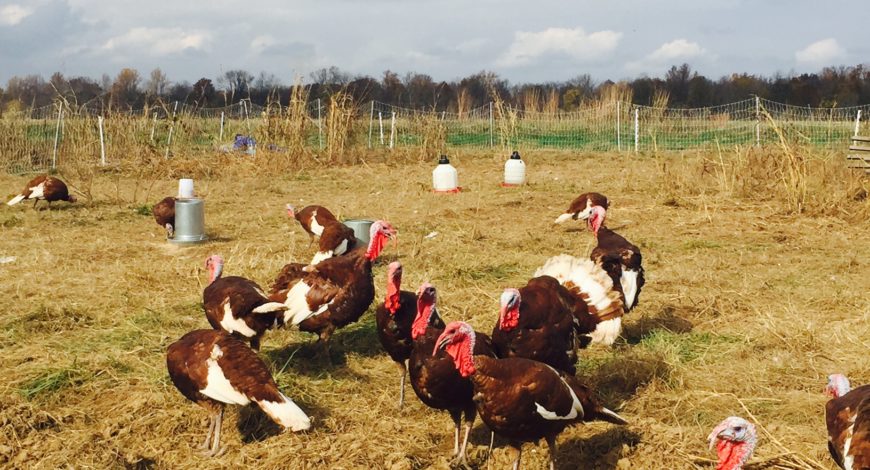 Birds Should Be Birds

In honor of the Thanksgiving Holiday, we took the opportunity to profile our Partner Growers, Matt and Hillary Sargent. Matt and Hillary are the farmers behind Roots Underwood, a soil to community wellness business at Foxhollow. They raise a variety of herbs, produce and pastured animals, including turkeys.

Matt and Hillary got started with turkeys on a lark several years ago. They were homesteading in Indiana and bought a few turkeys “for fun”. Soon they were hooked and decided to make turkeys part of their business. After investigating a few breeds they settled on Kentucky Bourbon Reds to take to market. This KY native, heritage bird was well acclimatized to our weather and conditions. Choosing a heritage animal, rather than a homogenized breed popular with conventional farms was important to the Sargent’s for several reasons. Firstly, they are working toward Biodynamic certification for their birds. In order to obtain this, they must create a “closed” flock – i.e. birds born and bred on this farm. Their turkeys can mate as nature intended while conventional birds are not able to mate without human intervention (I’ll spare you those details). Secondly, a heritage breed is less susceptible to disease.  The turkey flock historically moves alongside other bird flocks, and early exposure to other diseases allows it to build life-saving resistance.

Last but not least, it’s important to the Sargent’s to “eat what my grandparents ate.” Raising heritage birds is a lost art. Knowledge that would have been passed down through generations has been lost. Matt and Hillary hope to change that, one bird at a time.

It hasn’t been easy. They lost a few turkeys to coyotes and raccoons, so Matt slept outside next to the turkeys for a full two weeks to protect them. Talk about devotion to his flock! But they’re excited about the future of the heritage turkey business, and the positive impact it will have on the land. A recent soil test revealed that the field, previously used for hay, was low on some important minerals. With biodynamic principles guiding them, they rotate their animals and spray BD preps. Matt is striving to “increase the soil biology and make the minerals more available. The biggest role of animals is to move minerals to the surface of the soil.” Not only are they working in harmony with the land, but the move is smart for business. They will keep back some hens and toms over the winter and will breed them in the spring. They hope to grow the flock to two to three times its current size, and believe there is plenty of demand in the area for local turkeys to support the growth.

Case in point, ninety percent of their turkeys have already been reserved (update 9/9/15 – all Turkeys are now sold). In addition to being totally free from antibiotics, hormones and GMOs, Roots Underwood’s birds have roamed approximately 9 acres of pasture over their lifetime; feasting on peas, amaranth, oats, kale, clover and vetch the Sargent’s planted in the field for them.

Pasture raised birds are a little different than those you’d get in the grocery store, so I asked Matt and Hillary what I should expect when cooking their turkeys. Matt said we should allow less cooking time – “cook it like you cook a butterball and it will dry out.” Hillary said that the meat is much richer – “the white meat almost tastes like dark meat.” They recommended either using a spatchcock technique, or smoking.

Brining is also a great way to start off the cooking process and add familiar flavor profiles. Either way you choose, expect the meat to be juicy and flavorful.

In our family, we like to go around the table and say something for which we are thankful for before we eat. This year, I can think of a few things. Before anything else though, I’m thankful for Matt and Hillary and the other farmers at Foxhollow for the incredible dedication they show to the land and their community. A toast to you, farmers: May your hens be fat and your coyotes be lean!

For more information about Roots Underwood, visit their website www.rootsunderwood.com. To reserve your turkey, contact 502.594.6947 UPDATE: ALL TURKEYS ARE NOW SOLD

Maggie is a 4th generation steward of Foxhollow Farm. She is passionate about supporting farmers and providing our local and broader community with 100% Grassfed Beef and inviting folks out to Foxhollow to experience a working farm. She is a co-host of The Farmer and The Foodie and strives to encourage folks to enjoy food around a table with friends and family. During the growing season, you’ll find her out in the pumpkin patch or kitchen garden; learning with the partner growers at Foxhollow Farm. Maggie is a graduate of the Walker College of Business at Appalachian State University and serves as a board member for Dare to Care Food Bank.
Welcoming Maryhurst to Foxhollow Farm
Heritage Turkey Brining Recipe