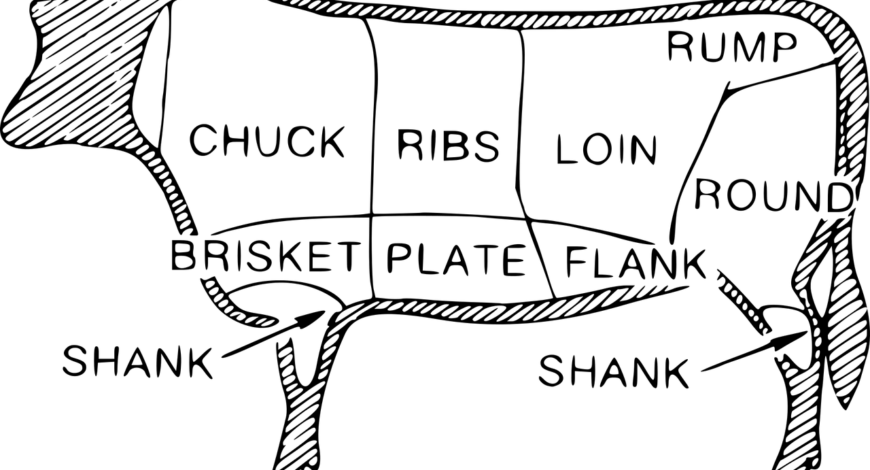 4 things an animal must have (according to butcher Darrio Cecchini):

Foxhollow has been lucky to have some prestigious visitors over the years, but working with the team at Bravo’s Top Chef was different from any experience I’d had. It felt like we built a relationship. The production crew visited us several times over a few months – they came to the concerts, walked the farm, and learned about the animals. However, my commitment as the Bravo’s Top Chef Cast Gardener didn’t necessarily mean Foxhollow would make a show appearance.

The production crew liked us and had ideas about using the beef, but I was surprised to learn that Bravo’s Top Chef really is unscripted. They make changes as the show story develops, adapting to what happens as they go. So it was a happy surprise when I got the call that they wanted to use an animal from our farm for an episode featuring internationally-renowned butcher, Dario Cecchini. They were flying him from Italy to demonstrate butchering the whole animal to  the ” 9 primal cuts.” The chef cast would use our beef in a challenge the same day. 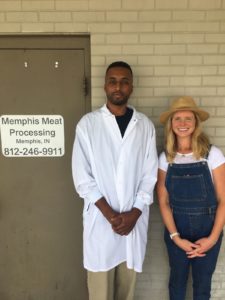 Derek and I went straight to the herd to pick out a perfect animal. We chose a beautiful heifer that was part Angus and part Corriente.  Her Corriente ancestry meant she was small framed but she was filled out to perfection and showed all the signs she’d make well-marbled and flavorful meat.

We took her to Memphis Meats, the family-owned processor in Indiana we’ve partnered with since Foxhollow’s beginning. They slaughter using humane methods and ensure quality is top-notch. Our head herdsman Derek personally drove her (as he does with all our animals) to be sure her ride was stress-free. When the beef had been processed, two production assistants brought a refrigerated truck to pick up the 907 lbs of beef the processor had split into two sides.

A few of us from the farm helped load the meat. It was pretty funny as we tried awkwardly to hoist the sides with a forklift. Eventually, we just decided to lift each 450 lb half into the truck with our own hands. All of us felt a little rush of pride when we were done –  Derek for raising it, Vince for processing it, and the rest of us for lifting it! There were a lot of high-fives and then it was over. The beef was on its way to Decca, where the episode would be filmed.

At Decca, Dario was joined by his wife (who also acted as his translator), and his friend and chef, Nancy Silverton. Each side of beef was set on a table in the courtyard and then the cast was led in to reveal the show’s guests.

If you’re like me, you might not have heard of Darrio and Nancy, but by the way, the chefs freaked out, I quickly learned they were a really big deal. It was about that time that I started getting really, really nervous. Darrio was clearly an outspoken and gregarious personality who had some strongly-held opinions about beef. What would he say about our beef on national television?

As he began to prepare the primal cuts, he explained what he was doing and peppered his instruction with his thoughts about food and community. He talked about the importance of respect for the animal and sustainable practices and I held my breath. When he said he could tell the meat was raised well, and he wished he could get beef like this at home, I cried! It was such a relief that he read in the marbling, texture, and fat that this animal had a good life and was taken care of. We can talk all day long about practice, but the product never lies. I can’t describe the pride and excitement I felt as his enthusiasm swept over all of us. I will never forget i 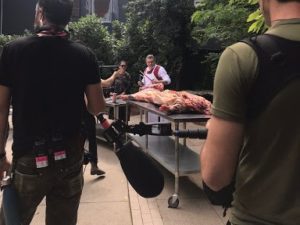 He worked through the nine cuts and dropped each primal section into a bucket. When he had completed each side, the chefs got to choose a section and moved to Decca’s kitchen to quickly come up with a dish that would blow the judges away.

What struck me the most about Darrio’s instruction was his view on beef overall. He said that most people think of beef products as a triangle of quality. At the bottom are the cheapest parts – ground beef and organ meats. In the middle of the triangle are your better cuts, and at the top are the rarest and tastiest bits like tenderloin. He challenged that idea and said he considers meat a circle – every cut, every morsel is valuable and tasty when it has been raised with respect and prepared with care. I loved the way he reframed these long-held ideas and couldn’t wait to see what the chefs would do with it. We were about to try dishes using beef raised on our farm, prepared by some of the best chefs in the country. 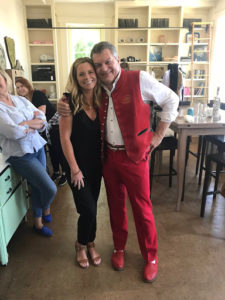 Next time: I learn just how hard it is to eat on camera as we try the Bravo’s Top Chefftestants’ preparations.

Maggie is a 4th generation steward of Foxhollow Farm. She is passionate about supporting farmers and providing our local and broader community with 100% Grassfed Beef and inviting folks out to Foxhollow to experience a working farm. She is a co-host of The Farmer and The Foodie and strives to encourage folks to enjoy food around a table with friends and family. During the growing season, you’ll find her out in the pumpkin patch or kitchen garden; learning with the partner growers at Foxhollow Farm. Maggie is a graduate of the Walker College of Business at Appalachian State University and serves as a board member for Dare to Care Food Bank.
Healthy Recipe for The New Year
100% Grassfed Beef Brisket Chili